If you’re not yet pressure cooking, let’s just say you’re wasting a whole lot of time in the kitchen. Sure – you love your slow cooker meals, but what if there was a faster way to achieve the same tasty results?

That’s what pressure cookers are built for. They are essentially faster versions of slow cookers. If one of the things that come to mind when you hear the phrase “pressure cookers” are childhood memories of food remnants on the kitchen ceiling after a cooker explosion, then you should know that these must-have kitchen devices have come a long way since then.

They now have sophisticated safety features which not only make them fail-safe but increase their functionality as well. Here are some helpful tips you need to know when it comes to pressure cooker slow cooker recipes.

All Slow Cooker Recipes Are Convertible

It’s important to mention here that most modern electric pressure cookers like the Instant Pot Ultra Mini 10-in-1 have a slow cooker option. So getting your hands on one is the first step.

Suppose that you were out and about running errands all day. Your initial plan involved making a slow cooker meal in the evening, but you end up getting home later than you had anticipated. You don’t have to change your entire dinner menu.

You can make the exact meal using a pressure cooker, which is much easier to do anyway. It drastically cuts down on cooking time while maintaining the same delicious flavor of your favorite “slow and low” crockpot meals.

You just need to make a few tweaks here and there and voila! You won’t be able to tell the difference. There isn’t a one-size-fits-all formula for converting slow cooker recipes into pressure cooker meals. However, before you go ahead and dive into the deep end, you should probably do your homework first.

Go online and look for a similar pressure cooker recipe version of the slow cooker one that you want to convert. This will give you a ballpark of the cooking times, as well as any other recipe modification you might need to make.

Pressure Cooker Slow Cooker Recipes Must Have Some Liquid

All pressure cookers like the Cuisinart Quart 1000 rely on, well, "pressure" to increase the temperature at which food cooks. This pressure comes from trapping the steam that would otherwise escape if the cooker didn't have an airtight seal to begin with.

The steam has to come from somewhere, right? All pressure cookers, therefore, need to have some water or other liquid that gives off steam to create the pressure. They typically require at least 1 cup of water, although this amount varies depending on the recipe.

If the original slow cooker recipe requires very little water, say a quarter cup, you may need to increase this to 1 cup when converting it to a pressure cooker recipe. But, if you’re cooking foods that have a high moisture content and therefore produce a lot of water during the cooking process, then you can get away with adding less water than the minimum 1 cup required. This, however, is the exception, not the rule.

Don't Fill Your Pressure Cooker All the Way Up

Pressure cookers come in many different sizes. The Instant Pot Lux 6-in-1, for instance, has three different capacities, that is, the 3-, 6- and 8-Quart. So, depending on the size of the cooker you’re using, you might need to reduce the amount of food and liquid you place in it.

As a general rule of thumb, never fill your pressure cooker to the brim. The contents should not exceed more than two-thirds of the pot.

If your slow cooker recipe has ingredients that create foam while cooking or expand in size, you need to ensure that the cooker’s halfway mark isn’t surpassed. Otherwise, you might end up with a cooking disaster on your hands.

Wine and Liquor Don’t Do Well Under Pressure

Alcohol plays an important role in cooking, especially in crockpot recipes. Just like salt, it enhances the rich flavor of food. It improves the brain’s perception of flavor through molecular bonding and evaporation.

If your slow cooker recipe calls for the addition of wine or liquor, you need to modify it slightly when converting it into a pressure cooker recipe. This is because, when pressurized, the two substances remain largely unchanged. So they don't evaporate.

Unless you want the tangy raw flavor of alcohol in your meal, here’s what you need to do: Decrease the amount of alcohol required by half and then use the sauté function of your pressure cooker to reduce it. Sautéing is always done with the lid off.

Once you do this, you can then proceed with the pressure cooking. The Yedi 9-in-1 Total Package Pressure Cooker comes with this all-important sauté feature.

Bear in mind that using liquor under pressure is dangerous since it doesn't evaporate during the cooking process. Instead, it gets dispersed in the steam as it escapes from the vent making it highly flammable.

Ensure That You Adjust Your Cooking Time

Pressure cookers such as the GoWise USA Cooker cook a lot faster than their slow cooker counterparts. So you need to adjust your overall cooking time accordingly. 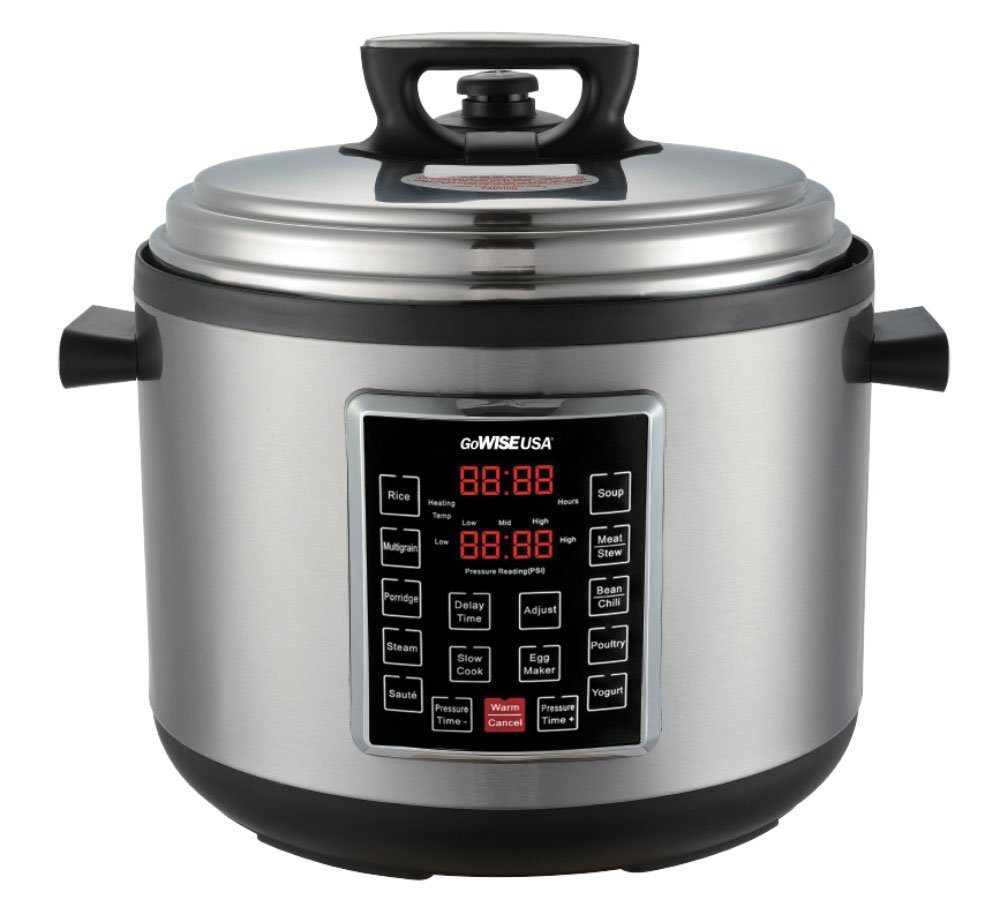 Bear in mind that it takes a bit of time for the pressure cooker to reach the optimum pressure level. You, therefore, need to factor this in when counting down the cooking time for a particular meal.

The time needed for different recipes to reach the designated pressure level varies depending on factors like the initial temperature of the ingredients used as well as how full the pot is.

Save the Milk and Cheese for Last

Some pressure cooker slow cooker recipes call for the addition of milk, cream, or cheese. If you add them at the start of the process, these ingredients will clump-up under pressure, and the results will leave you disappointed.

To avoid this, stir them in after you’re through with pressure cooking. The same guideline applies when adding thickeners like cornstarch and flour. Put them in once you complete pressure cooking and use the sauté function to simmer the sauce. The Geek Chef Multiuse Electric Pressure Cooker creates perfect sauces every time.

Slow cooking on a pressure cooker isn't as simple as hitting the "slow cooker" button and expecting the same results as you would in the original recipe. You need to understand how the pressure cooker slow cooker recipes convert if you want to get the best results. We hope this guide has shed some light on the subject.