How a Pressure Cooker Works

A pressure cooker is one of those kitchen devices that bring up feelings of nostalgia every time you reminisce about the good old days when you would watch your mother or granny cook. Remember that large peculiar cauldron that had a whistling vent on top of a tightly sealed lid? You know… the one you were instructed to keep off from when it was on the stove? Yup, that’s the one.

However, pressure cookers are no longer what they used to be. The manufacturing standards and technology used to make them has come a long way since then to make them safer than they were in the 80s and 90s.

Now that the novelty of slow cookers and microwave ovens has worn off, pressure cookers have made a comeback. They are now a must-have kitchen utility for busy cooks looking to cut down on cooking time.

After all, in this fast-paced world, who wants to spend hours slaving away in the kitchen when they have a million other things they need to do? Here’s how a pressure cooker works to achieve this feat.

How a Pressure Cooker Works – the Basics

If you were not a fan of physics class in school, buckle up. It’s time for a quick lesson in how pressure cooking works to cut your cooking time significantly. Don’t worry, though. You'll enjoy this.

The secret of a pressure cooker lies in confining all the pressure inside the pot. If you were to heat a liquid inside a pot without a lid on it, it would boil at 212 degrees Fahrenheit. The steam evaporating from it would also be at the same temperature.

But if you placed an airtight lid on the pot to trap all the steam, it would effectively raise the boiling point of the liquid from 212°F to as high as 250°F. This cuts down on the overall cooking time by up to 10 times, depending on what you’re cooking.

Modern-day pressure cookers aren’t what they were in the past. Before, you would more or less have to guess what temperature or pressure these cookers were operating at. Today, they are mighty swanky with loads of customizable settings that allow you to have full control over the pressure and temperature levels.

The Breville Fast Slow Pro Multi-Function Cooker, for instance, has 11 pressure cooking settings that you can alter depending on what different recipes call for. If you’re not sure whether the cooker is pressurizing, its color-changing LCD lets you know exactly what’s happening inside. 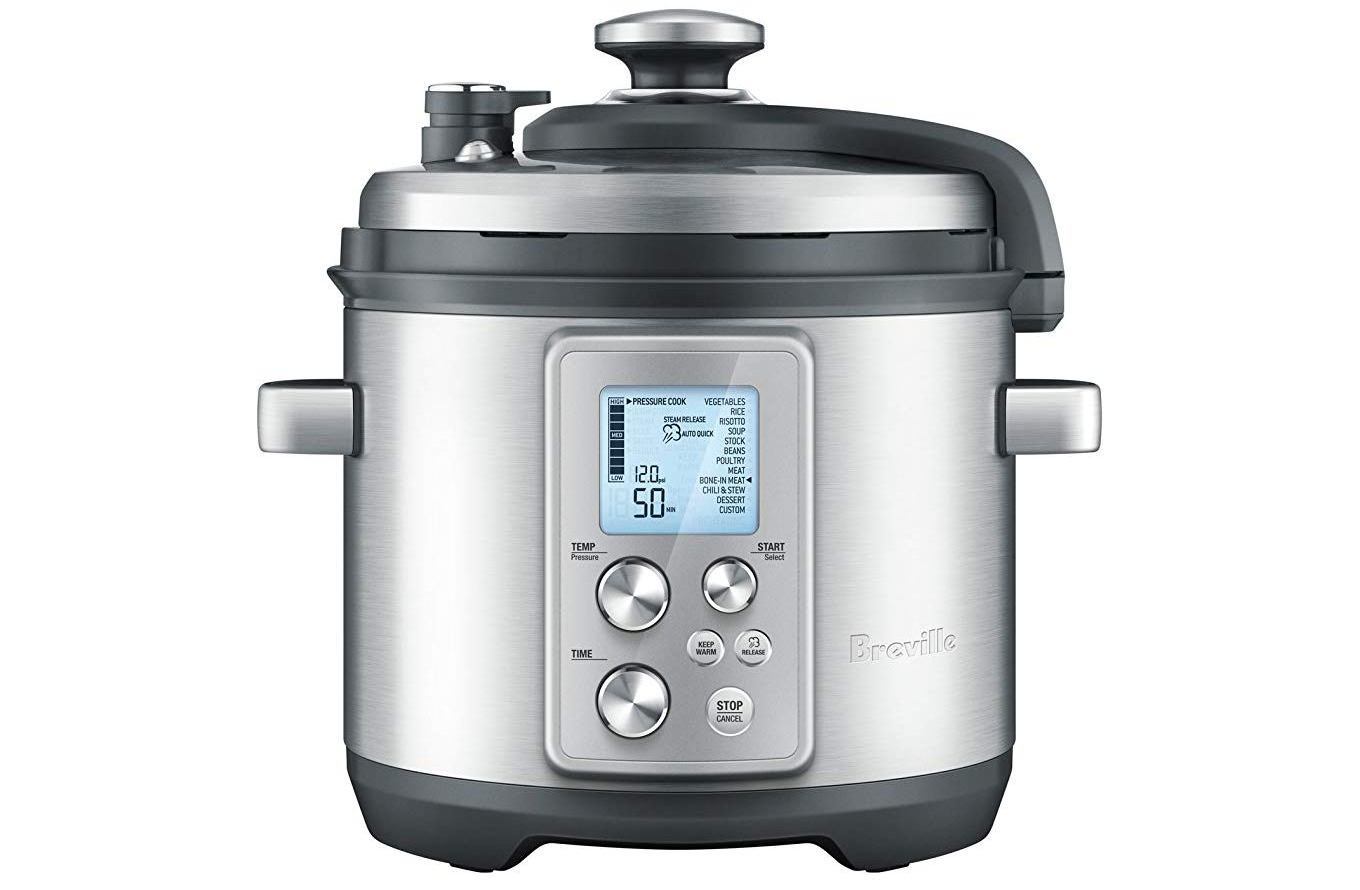 The classic design of a pressure cooker has remained largely the same for decades. It comprises a cauldron or large pot with a locking lid that forms a tight seal designed to trap all the pressure inside. The lid has a small valve at the very top to control the amount of pressure that builds up inside the pot.

In traditional-style cookers, the valve is fitted with a weight that makes a hissing sound when the pressure inside the pot grows strong enough to push the steam out through the vent. If you try to lift the weight before the pot has lost all its pressure, there is a high chance of getting scalded by the steam.

This is what makes traditional pressure cookers dangerous. Modern cookers, however, don't have this risk. They are designed with sophisticated pressure-release systems that make them 100% safe to use.

The Instant Pot Lux 6-in-1 Electric Pressure Cooker, for instance, is one of the safest pressure cookers in the market right now. It comes with 10 safety features, one of which includes a release mechanism that allows you to easily adjust the pressure and release it manually.

Others like the Presto 6-Quart Aluminum Pressure Cooker come with a cover lock indicator that shows when there’s still pressure inside the cooker, therefore, preventing the lid from being opened until the pressure inside is safely released. These types of visual indicators are important since they minimize the possibility of rupture, which would occasionally happen with old-style pressure pots.

Most pressure cooker settings are developed and tested at sea level. However, you need to bear in mind that the boiling point of liquids decreases as you move to higher altitudes. Generally, for every 540-foot elevation above sea level, you can expect a 1-degree drop in the boiling point.

All pressure cooking recipes are based on the pressure and temperature values at sea level. The rule of thumb is to increase the cooking time by 5 percent for every additional 1,000 ft. after the first 2,000 ft. elevation.

So a recipe which calls for 20 minutes cook time at sea level, would require an additional 3 minutes when cooking at 5,000 feet above sea level. If doing the math is too cumbersome for you and you would, quite frankly, rather avoid it altogether, you’re in luck.

There are plenty of pressure cooker options on the market that have an altitude adjustment feature that does all the work for you. A top choice for many is the Instant Pot Ultra 10-in-1 Electric Pressure Cooker with altitude adjustment, which is great for people who live in high-elevation areas. All you need to do is set the altitude once and it automatically applies to all pressure cooker functions to adjust the cooking times appropriately.

How a Pressure Cooker Works for Different Types of Recipes

The most critical factor you need to think about when it comes to pressure cooking is the time. Remember, unlike conventional pots, you can’t simply pull off the lid and take a peek to see if the food is cooked.

Depending on what you’re making, you need to use an accurate and reliable timer to ensure that you don’t overcook or burn your food. To take the guesswork out of the whole process, there are many pressure cooker models like the Yedi 9-in-1 Instant Programmable Pressure Cooker that come with a built-in timer that will come in handy to prevent your meat from turning into mush.

Get the Best of Both Worlds

Microwaves are great for cooking food fast, but their downside is that they strip the food of its natural flavor. Slow cookers, on the other hand, retain and enhance the rich flavors of food, but the process is entirely too long for people who don’t have the luxury of spending endless amounts of time in the kitchen.

Pressure cookers combine the best of both worlds to give you delicious-tasting food in a fraction of the time. The secret to how a pressure cooker works is in confining all the steam inside the pot to shorten the cooking time drastically.